Funding in manufacturing plants will increase plastic production by 40%

The global plastic binge which is already causing widespread damage to oceans, habitats and food chains, is set to increase dramatically over the next 10 years after multi-billion dollar investments in a new generation of plastics plants in the US and Asia.

Fossil fuel companies are among those who have invested more than $180bn since 2010 into new “cracking” facilities that will produce the raw material for everyday plastics from packaging to bottles, trays and cartons.

The new facilities – being built by corporations like Exxon Mobil Chemical and Shell Chemical – will help fuel a 40% rise in plastic production in the next decade, according to experts, exacerbating the plastic pollution crisis that scientist warn already risks “near permanent pollution of the earth.”

“We could be locking in decades of expanded plastics production at precisely the time the world is realising we should use far less of it,” said Carroll Muffett, president of the US Center for International Environmental Law, which has analysed the plastic industry.

“Around 99% of the feedstock for plastics is fossil fuels, so we are looking at the same companies, like Exxon and Shell, that have helped create the climate crisis. There is a deep and pervasive relationship between oil and gas companies and plastics.”

Any increase in the amount of plastic ending up in the oceans would have a disastrous impact.

We are already producing more disposable plastic than we can deal with, more in the last decade than in the entire twentieth century.

The amount of plastic produced in a year is roughly the same as the entire weight of humanity.
Global annual plastic production, million tons 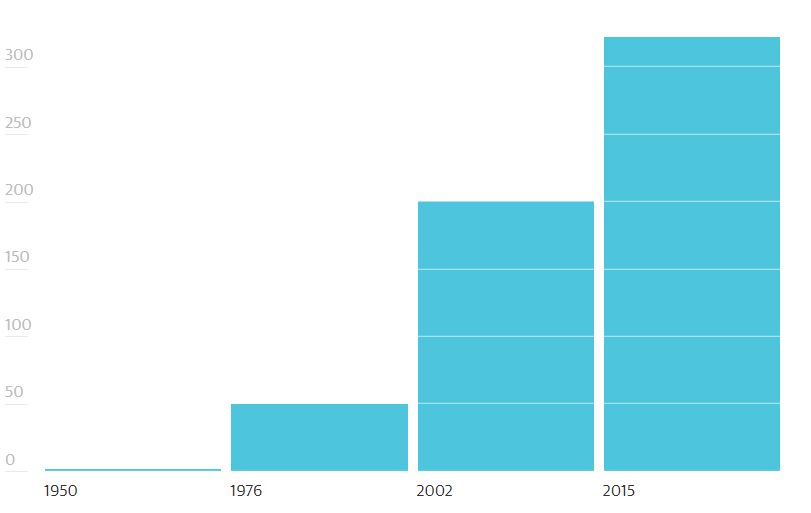 The huge investment in plastic production has been driven by the shale gas boom in the US. This has resulted in one of the raw materials used to produce plastic resin – natural gas liquids – dropping dramatically in price.

The American Chemistry Council says that since 2010 this has led to $186bn dollars being invested in 318 new projects. Almost half of them are already under construction or have been completed. The rest are at the planning stage.

There is a growing concern about the scale of plastics pollution around the world. Earlier this year scientists warned that it risked near permanent contamination of the planet and at a UN environment conference in Kenya this month the scale of plastic in the sea was described as an “ocean armageddon”.

A million plastic bottles are bought around the world every minute! Most end up in landfill or the sea.

However, campaigners warn that despite the rising tide of concern, powerful corporations are pressing ahead with a new generation of plastic production facilities that will swamp efforts to move the global economy away from single use, throw away plastic products.

Athough the majority of the new investment is in the US, the impact will ripple outwards in the form of vast new supplies of raw materials for plastics being transported to Europe and China.

Petrochemical giant Ineos has been shipping natural gas liquids from the US to cracking plants in Europe and the UK on huge “dragon ships” for the past year.

Last month the company announced it will ship the first NGLs from the US to China in 2019 where it will be turned into plastic resin at a new cracking facility in Taixing China.

Experts believe the new facilities will lock in an increase in plastic production for years to come.

Matthew Thoelke, executive director at IHS Markit analysts in Germany and an expert in the global chemical industry, said the expansion in the US would be a critical part of a 40% increase in global plastics production over the next decade.

“This will help meet growing demand for plastic in the existing big markets of the US, Europe and China as well as a predicted steep increase in demand in India and south east Asia,” he said.

But the American Chemistry Council said the plastics boom had brought huge economic benefits to the US creating hundreds of thousands of jobs and allowing the manufacture of a wide range of important products from medical supplies to auto parts, piping to technology.

Be conscious of the plastics you buy, the packaging material of the products you buy and how you are contributing to the plastic waste piles!